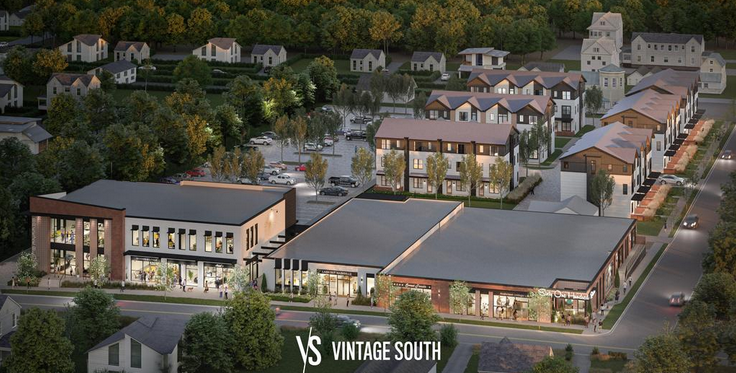 According to a release, Lyons’ Vintage South has secured a commercial construction loan of $10.7 million with ServisFirst Bank and a residential loan for $9.3 million with First Farmers. Demolition will begin immediately.

Lyons — perhaps best known for his Stocking 51 in The Nations — specializes in reinventing existing industrial buildings with retail, restaurant, residential and creative office spaces. (Read more on that here.) In this case, he will update an existing brick warehouse located at 6100 Robertson Ave. with commercial space and supplement it with potentially 24 townhomes. The warehouse had been home to Proctor Marble and Granite, a tile contractor.

Breeze Block will offer 24 for-purchase townhomes (each with a two-car garage). Twelve of those residences (in pods of four) will face Vernon Avenue, with the other 12 (also in three pods) located internally within the site.

Breeze Block will offer three vehicular access points (one on Robertson and two on Vernon). All the 152 surface parking space will be positioned behind the structures in an urban orientation. The project also will include 39,000 square feet of office, restaurant and retail spaces (see a site plan here).

“The Breeze Block project will allow us to continue our momentum from The Nations to Charlotte Park and will bring needed commercial space to the neighborhood,” said Andrew Moreton, Vintage South chief operating officer.

The general contractor for the project will be Nashville-based City Construction. Centric Architecture, also locally based, is the designer.

Lyons also recently completed an addition to Stocking 51 (read here) and has reinvented the former Vaughn Manufacturing facility in East Nashville with what is called Highland Yards.

Also, Vintage South Development is teaming with The Legacy Companies to give new life to the site once home to Hobson United Methodist Church, also located on the east side. That project is called Eastwood Village.

A Dickerson Road property that changed ownership hands twice in 2019 and on which a mixed-use building has been planned since 2015 seemingly could now land a development.

According to an applied-for permit (related to water and sewer availability) the proposed, seemingly four-story building could offer a hotel, restaurant space and retail space.

Nashville-based Alfred Benesch and Co. is the engineer, the permit notes, while Pfeffer Torode Architecture is handling the design.

Nashville-based 829-D LLC owns the site, having paid about $1.13 million for it in September 2019. The parcel has an address of 829 Dickerson Road. A second and adjacent parcel, located at 835 Dickerson will be part of the development. The two parcels offer a collective 0.9 acres.