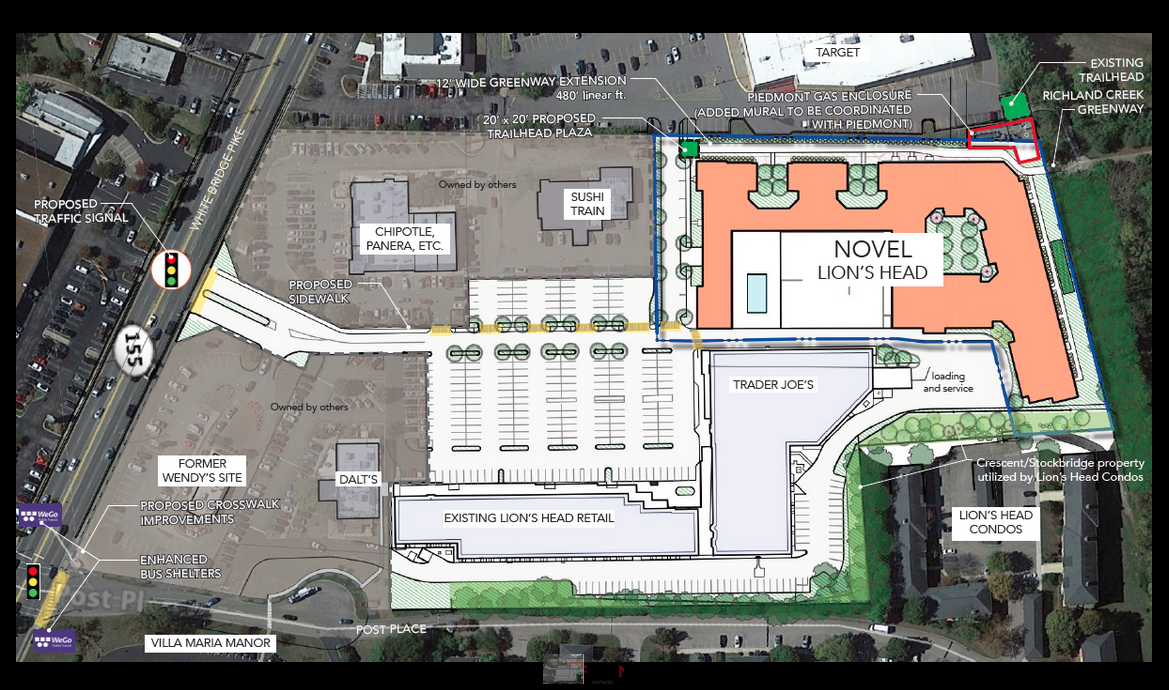 Details are emerging and images have been released of a mixed-use building slated for the Lion’s Head Village retail area of West Nashville, with a connection to the Richland Creek Greenway planned as part of the project.

Charlotte-based Crescent Communities is eyeing the 285-apartment unit Novel Lion’s Head for a 3.5-acre site currently home to a structure that most recently accommodated a Steinmart store. The area is perhaps best recognized as the home of a Trader Joe's grocery, with the site for the future structure to be sandwiched by the grocery building and a Target structure.

The address is 40 White Bridge Road.

Crescent will work with Brentwood-based development company Pearl Street Partners and with Nashville-based The Fifth Generation Property Company, the latter being the broker assisting with entitlements.

During a virtual public meeting recently, multiple individuals voiced concerns regarding traffic while others noted their support for the project at this early stage of the effort. An LLC affiliated with San Francisco-based Stockbridge Real Estate owns the property, having paid $45.3 million for it in January 2020 along with the Trader Joe's property (read here). Crescent has the Steinmart property under contract and has not disclosed a closing date.

The front segment of the Novel Lion’s Head building is planned to rise seven floors and will include a retail space. The back section of the structure is expected to step down to five stories, with 437 parking spaces in a structured garage to be included. Of those spaces, 56 are planned to be for visitors and free.

As noted, access to the Richland Creek Greenway is eyed, with various greenway improvements at that access point expected, Crescent said.

Crescent officials said during the recent public meeting that the apartments are expect to rent between $1,800 and $3,200 per month. The company will pay to have a traffic light installed between the buildings home to Dalt’s and Panera Bread/Chipotle.

“Novel Lion’s Head will be a high-quality mixed-use development that is respectful to the current community and architecture while further activating the neighborhood with new residents who support the shops and restaurants and enjoy enhanced walkability,” Ben Collins Crescent senior managing director, emailed the Post. “We also will open and improve access to the greenway trailhead and provide significant traffic and parking improvements. Crescent’s approach is community-centric and we will continue to listen to neighbors and respond to concerns.”

The team was to have gone before the Metro Planning Commission in February to request an amendment to the commercial planned unit development overlay district that regulates usage on the portion of the property on which the building is slated. That will now be done Tuesday, May 27, contingent on gaining the support of Metro Councilmember Kathleen Murphy (in whose District 24 the property sits).

The aforementioned Steinmart closed in 2020.