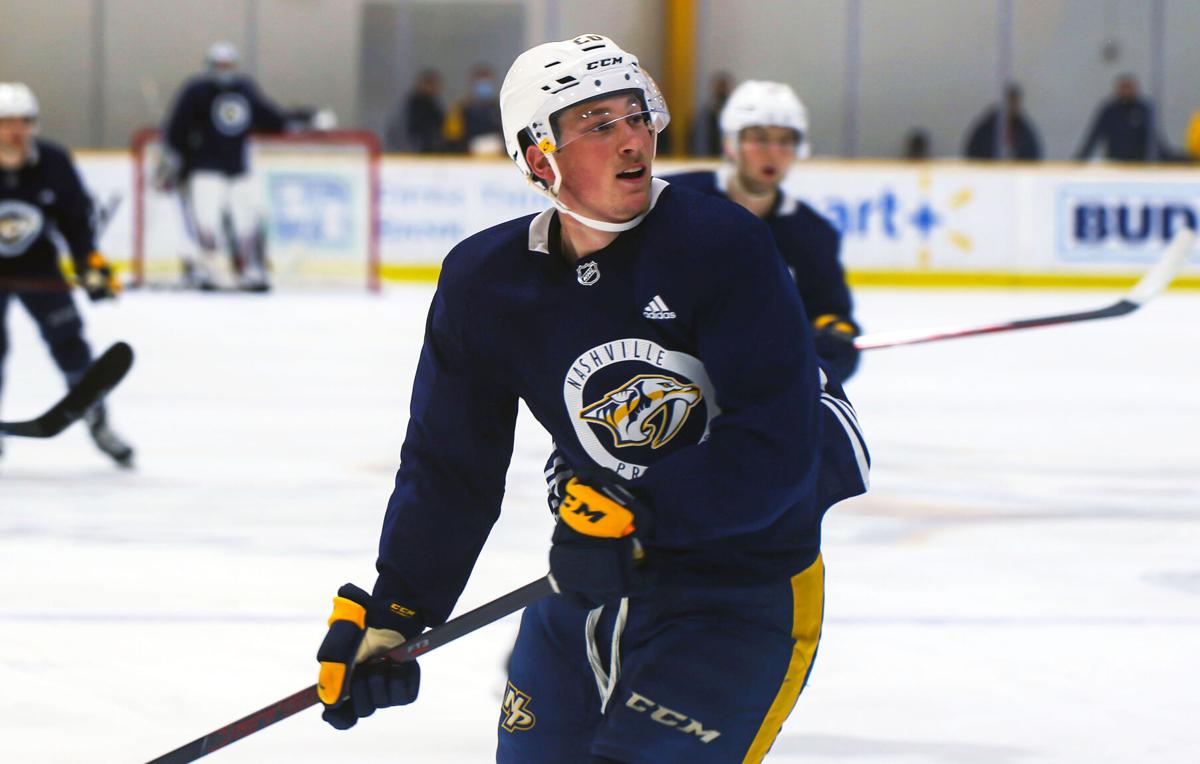 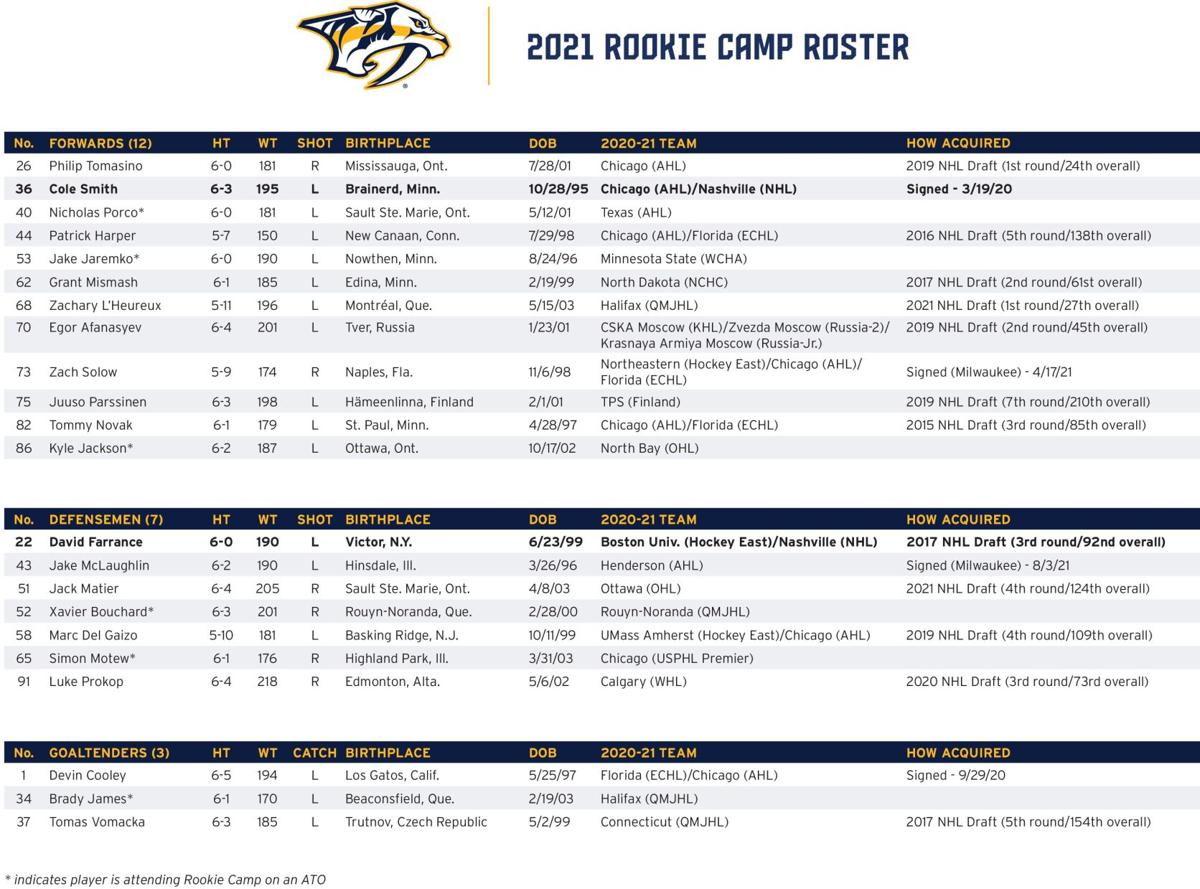 For the first time during his tenure as Nashville Predators head coach, John Hynes will have the benefit of a full development camp, rookie camp and training camp.

Predators rookie camp begins this week with practices at Centennial Sportsplex on Thursday at 1 p.m. and Friday at 9 a.m. before embarking on a four-day road trip to Florida where Nashville will play three rookie games against the Tampa Bay Lightning on Saturday, the Florida Panthers on Sunday and the Carolina Hurricanes on Tuesday.

Ushering in the era of the competitive rebuild, many Predators rookies could be making cases for themselves to see playing time in 2021.

That said, here are the top five players with the most to gain from rookie camp:

Tomasino was one of the top players in the American Hockey League last season as a teenager, scoring 13 goals and 32 points in 29 games for the Chicago Wolves, leading the team in points, plus/minus (+20) and shots on goal (91).

He’s got natural playmaking skills as both a passer and a shooter, and his speed and skating ability are NHL quality right now. It’s no secret the Predators need an infusion of goal scoring after finishing 22nd in the league in goals scored (151) in 2020.

Predators General Manager David Poile is on record several times during the offseason stating that Tomasino will be given every chance to make Nashville’s opening-night roster. A good rookie camp followed by a strong training camp could be enough to convince the Predators Tomasino is NHL ready.

While it may appear that Farrance is buried on the depth chart for now, don’t be surprised to see him make his way to the NHL fairly quickly.

Nashville’s top five defensemen are all but locked in, but the final spot on the third pair remains up for grabs. Matt Benning is the likely favorite for that spot, but after an unimpressive 2020 that saw him contribute just one goal, four points and a minus-3 rating, it wouldn’t be surprising if he was on a short leash.

The 27-year-old was nearly invisible in the playoffs and with just 43 shots generated last season, Benning doesn’t quite fit in well with Nashville’s system, which relies on a high volume of shots from the blue line.

The Predators don’t know what they’re getting from Mark Borowiecki, who played in just 22 games last season after battling injuries and personal issues. The only thing Ben Harpur really brings to the table is his size (6-foot-6, 231 pounds), and Matt Tennyson was likely just an insurance signing after the Predators were forced to play 15 defensemen last year.

Farrance is a puck-moving, mobile defenseman who excels on the rush and is solid at creating precise zone entries and exits. The skill he has that perhaps no other defenseman on the roster aside from Josi and Ekholm have is natural scoring ability. Farrance led all defensemen with 1.45 points per game during his senior year at Boston University and he finished his NCAA career with 26 goals and 88 points in 113 games.

If he doesn’t make the roster out of camp, expect Farrance to be one of the Nashville’s first injury call ups.

Despite his 5-foot-11, 196-pound frame, L’Heureux is near impossible not to notice when on the ice. The 18-year-old forward plays with a wrecking-ball mentality, as is evidenced by the four suspensions he accrued last season in the QMJHL.

But bad temper notwithstanding, the aggression and physicality L’Heureux brings every game is presumably why the Predators traded both of their second-round picks this year to move back into the first round and grab him. He’s got the physical game of Tanner Jeannot with the offensive skill of Craig Smith. L’Heureux plays with no fear and if he can’t get past a defender, he goes through them.

He fits the new “Predator way” to a letter, and for that reason alone, L’Heureux could possibly play a bottom-six role at some point toward the back half of this season.

At 6-foot-3 and 203 pounds, Afanasyev has the size to be the kind of power forward the Predators have been searching for since losing James Neal in 2017. The 20-year-old was the second-leading scorer for the Russians during the World Junior Championship last year and he was decently productive in the KHL last season.

Afanasyev has a very good shot and he’s difficult to move off the puck. One of his top strengths is his play on the forecheck and he could be groomed for a future second- or third-line role.

While the depth chart at forward is pretty cluttered right now, Afanasyev could be in line to be one of the first forward call ups this year behind Rem Pitlick and L’Heureux.

It’s highly unlikely — barring injury — that Vomacka will be anywhere near the NHL this season or next. However, with Connor Ingram still very much a wild card, the 22-year-old goalie has an opportunity to see sizeable playing time with the Milwaukee Admirals.

Vomacka signed his entry-level contract with the Predators during the offseason, ending his NCAA career after three seasons with the University of Connecticut. He ended his Husky career with a 32-33-5 record with a 2.88 goals-against average and .906 save percentage.

While those numbers don’t exactly jump off the page, Vomacka has the third-most wins and fourth-best save percentage in program history. He was also named to the Hockey East All-Rookie team in 2018 and his 2.32 GAA that year was the second-best in school history.

Ingram played in just five games last season and whether he can shoulder a starter’s workload this year after sitting out most of the season last year remains to be seen. With an impressive rookie camp, and maybe an extended look during training camp, Vomacka could make a case for himself to get a significant number of starts in goal with Milwaukee.

Below is the Predators' full rookie camp roster: