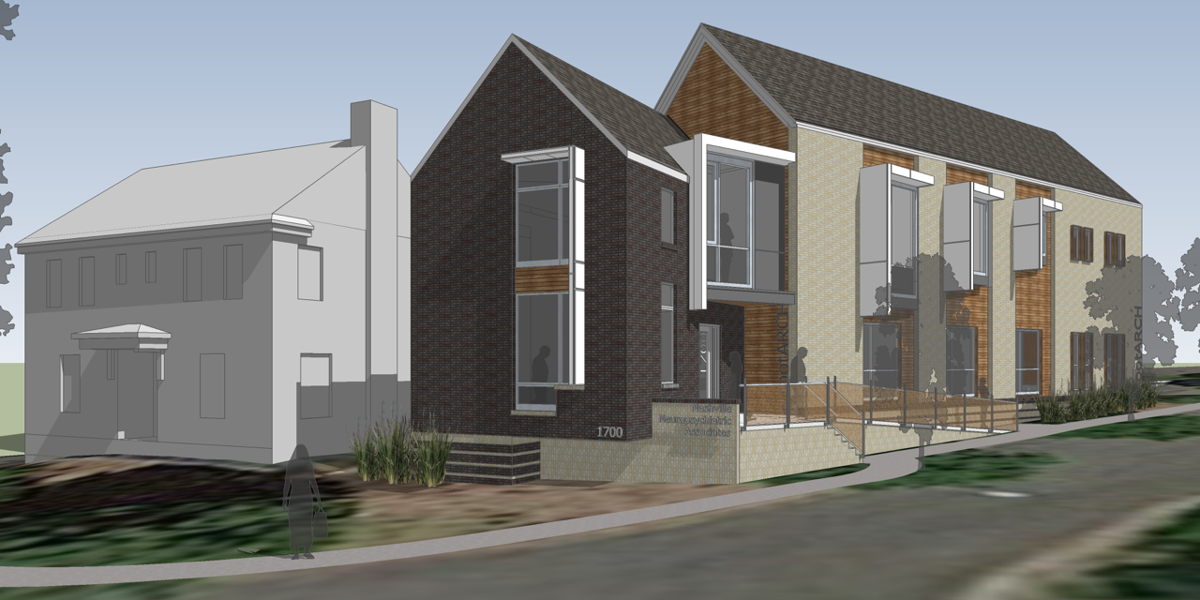 The development team behind a Music Row medical office building is targeting a March 2017 opening for the structure.

Nashville-based Dr. Craig Clark and wife Amy Powell will operate their psychiatric practice from what will be called the Nashville Neuropsychiatric Associates Building, with an address of 1700 Dorothy Place. The small street (see here courtesy of Google Maps) runs east-west between 16th and 17th avenues south and fronting Wedgewood Avenue.

Both Clark and Powell currently practice from an office in Burton Hills in Green Hills, with Clark having been in practice for 25 years.

The approximately 5,000-square-foot two-story Dorothy Place building (a rendering is shown above) will feature a contemporary design, a below-grade 10-space parking garage and, Powell said, “soaring ceilings” for the second-floor space.

Clark and Powell have enlisted Hybrid Phoenix Holdings to serve as general contractor. rootARCH and Pinnacle Financial Partners are providing design work and financing, respectively. All are Nashville based.

“John Root and his team have done a strong job with the design,” Powell said. “John’s sense of aesthetic is superior. I typed my vision and he put it into practice. We feel the building will be an attractive addition to Music Row.”

Relatedly, Yancy Lovelace and Giachery Lizarraga, Hybrid Phoenix Holdings owners, will serve as co-developers with Clark and Powell in the adaptive reuse of and a rear addition to a historic former residential building located on an adjacent property. The four own that property, with an address of 1618 17th Ave. S., and a roughly 2,200-square-foot building (see here courtesy of Google Maps).

“We are currently in the planning phase to extensively renovate and expand the adjacent property,” Powell said, adding an October on-site start is being eyed. “Likely office users include legal, music or creative. However, we are open to selling if the right offer comes along.”

Likewise, rootARCH has designed the renovation plans for the historic home and the rear addition, with the Metro Historic Zoning Commission having approved new building (click on View Gallery in the above image to see a rendering).

Lovelace and Lizarraga are the developers of Farrow at Five Points, a mixed-use East Nashville project for which the commercial component is now under construction (read more here).