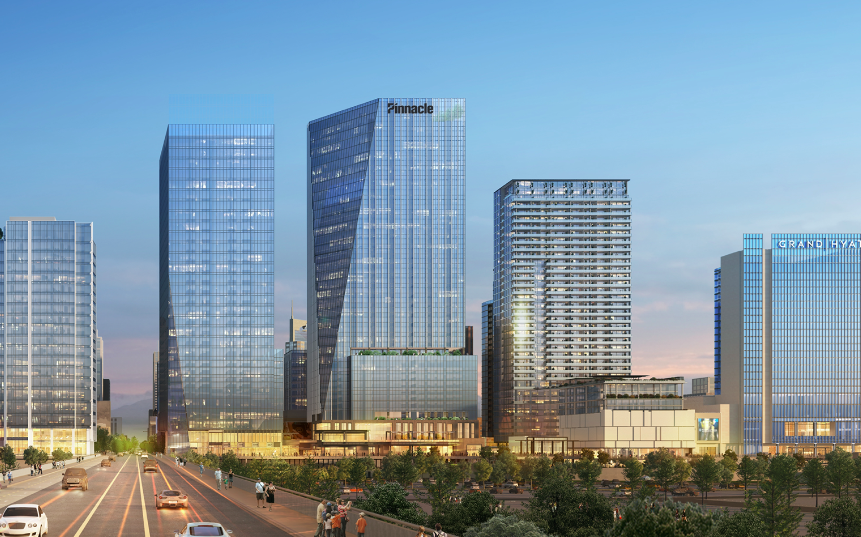 Pinnacle Financial Partners executives have signed a deal to move their downtown headquarters less than a mile to a future 34-story tower in the heart of Nashville Yards.

The skyscraper would be the city's tallest, based on occupiable floors, if standing today. To be designed by Nashville-based Gresham Smith, it is expected to rise at least 575 feet. Residential tower 505, for comparison, stands about 530 feet.

The largest bank headquartered in Nashville, Pinnacle has been the anchor tenant at The Pinnacle at Symphony Place tower on Third Avenue South in SoBro since 2010. That 29-story tower — no word yet as to what it might be called once its largest tenant relocates — is owned by Highwoods Properties. Its 520,000 square feet of space also are home to several law firms, including Bass Berry & Sims and Sherrard Roe Voigt & Harbison, as well as accounting giant PricewaterhouseCoopers.

Pinnacle's future home will have a trapezoidal shape that developers Southwest Value Partners say will help cut energy use and allow light to filter into all floors. Southwest plans to break ground on the building, which will offer 650,000 square feet of office space and 28,000 square feet of retail space, in the fourth quarter.

“Pinnacle is among the Southeast’s most prominent banking and financial services companies, with a widely-respected national reputation and a deep, longstanding commitment to client, employee, and community service,” Cary Mack, managing partner of Southwest Value Partners, said in the release. “The company’s business and brand fit perfectly with the excellence we continue to build at Nashville Yards and we are pleased and proud to have Pinnacle Financial Partners anchor our newest tower.”

Pinnacle will have its name atop the tower in the middle of the 18-acre Nashville Yards project. The bank also will open a 10,000-square-foot retail branch on the Nashville Yards campus, install several ATMs and set up its first all-digital offices in the two nearby towers that will house Amazon’s 5,000-person logistics operations center.

“We always like to help drive the next frontier in downtown development,” said Pinnacle President and CEO Terry Turner. “We were one of the first businesses to move into SoBro when Symphony Place opened 11 years ago. Now as Nashville Yards ushers in the next phase for the business district north of Broadway, we’re only too happy to be on the front lines once again.”