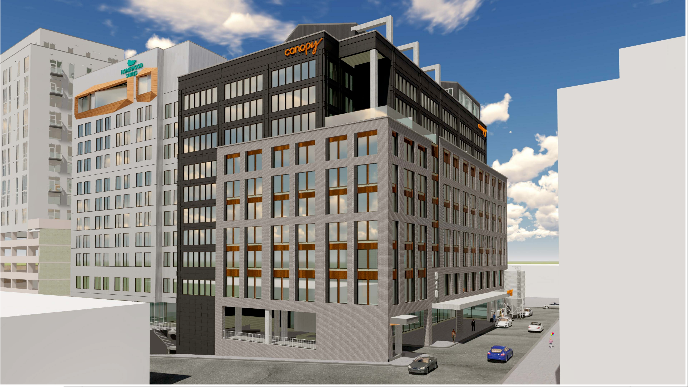 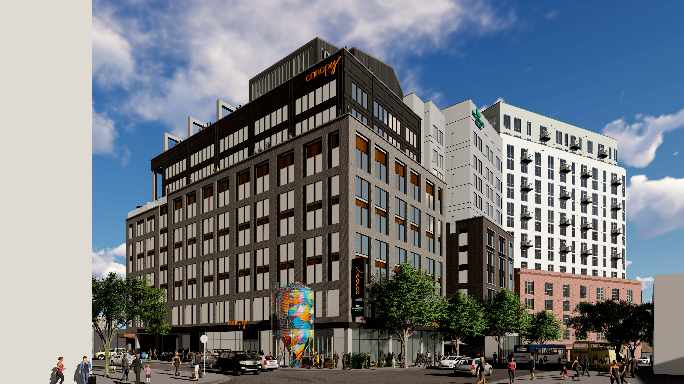 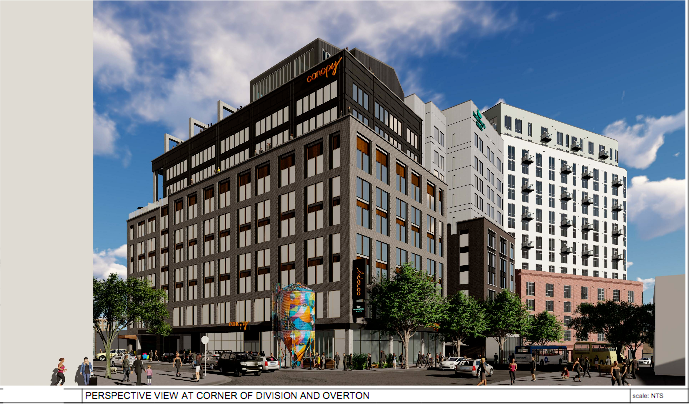 The company looking to develop the former Yazoo Brewery site in The Gulch with a building housing Hilton hotel brands Homewood Suites and Canopy has released images and some details regarding the project.

A Hilton spokeswoman previously emailed the Post that the two hotels are slated to open in early 2022.

The architect, according to documents submitted to Metro, is Overcash Demmett Architects, also based in Charlotte. Ragan Smith is handling land-planning and engineering duties..

The Homewood Suites, seen to the right of the Canopy, will offer a 2,500-square-foot retail space. The total room count for the two is 334.

Of note, the dual-branded Hilton building will rise next to a 16-story apartment tower, for which construction is underway (and seen to the far right in the rendering). South Carolina-based development company Greystar Real Estate Partners paid $10 million for the property at 908 Division St. that was last home to a Habitat ReStore location.

Tara acquired the former Yazoo property (pictured) in August 2018 in a quitclaim deed deal for which Metro records offer no dollar figure. The warehouse that once housed Yazoo will need to be razed.

Davidson County is home to two Homewood Suites hotels: one located on West End Avenue near Vanderbilt University and the other located near Nashville International Airport. Hilton unveiled the boutique Canopy brand in 2014 and has since opened 16 of the hotels. The Canopy located closest to Nashville is in Atlanta.

Homewood Suites, which debuted in 1989 in Omaha, is billed as offering “residential-style” hotel suites with kitchens. As of last December, the chain consisted of 492 hotels — with a collective 55,000-plus rooms in the United States, Canada and Mexico — and another 106 in the pipeline.

A family-owned business, Tara Investments entered the Nashville market in December 2003, when it acquired the Hampton Inn & Suites Nashville–Airport at 583 Donelson Pike.