Davidson County Chancellor Anne Martin this week denied a request from Rutledge Hill residents that she overturn the Metro Planning Commission’s approval of height modifications for two multi-tower projects in the area.

Three residents of the City Lights condominium building — located near the sites of the two proposed projects — sued both the developers and Metro earlier this year, alleging that the Planning Commission had improperly permitted the projects.

The Second and Peabody development (read here), to be undertaken by The Congress Group, is planned for three towers of 36, 32 and 18 stories while a nearby development from Centrum (read here) is planned for towers of 39, 32 and 29 stories. The developers were forced to seek Metro modifications, as existing guidelines cap heights in the neighborhood significantly lower. Developers are able to negotiate with Metro for additional building height in exchange for the projects offering benefits like green space, superior design and public parking — concessions that Martin called subjective. About two dozen projects have been granted such modifications in recent years.

Martin wrote in her order upholding the Planning Commission’s approval that she was “not unsympathetic” to the neighbors’ concerns.

“Indeed, as citizens of Nashville, we are all interested in appropriate, well-considered growth and residing in a city that is not for sale to developers,” she wrote. “It is difficult to understand what standards the Planning Commission and its staff are applying in approving these projects given how out of skew they are with the existing neighborhoods and the standards set out in the [downtown code]. It is not, however, for the Court to substitute its judgment for that of the Planning Commission, but rather to evaluate the process to determine if it acted in a manner exceeding its authority, was arbitrary and capricious, or made a decision not supported by the substantial evidence in the record. In this case the Court cannot make such a finding.

“If the leadership of Nashville is going to continue to create flexible standards to modify well-thought-out and drafted zoning ordinances, then courts are limited in the effectiveness of their review authority,” she added.

Steve Snyder, one of the neighbors, said that his group was evaluating appeal options.

“Chancellor Martin’s order is concerning in that it seems to say that the Planning Commission has unlimited discretion to grant ‘height modifications’ in the downtown area based on very subjective and vague criteria,” he said. “As a consequence of this decision, there could be no height limits on future development in Downtown Nashville. The decision undermines the whole plan created by the Downtown Code of unique, thoughtfully designed neighborhoods or subdistricts. All Nashvillians should be concerned about what future development and densities in our city will look like.”

The Congress Group, the Boston-based company working on the Second and Peabody development, said via a spokesperson that it was pleased with the ruling and that the company looks forward to “delivering its many benefits to the community, which includes 59,000 square feet of activated public space, all pursuant to the very high standards imposed by the Planning Commission and Planning Department staff.”

Added Chicago-based Centrum: “We feel the Order reflects the careful, deliberate process led by the City of Nashville, culminating with Planning Commission approval, that will enable us to develop a transformative project at the Cumulus site. With world class architecture and 1.5 acres in total park space, our project will provide tremendous public benefit.” 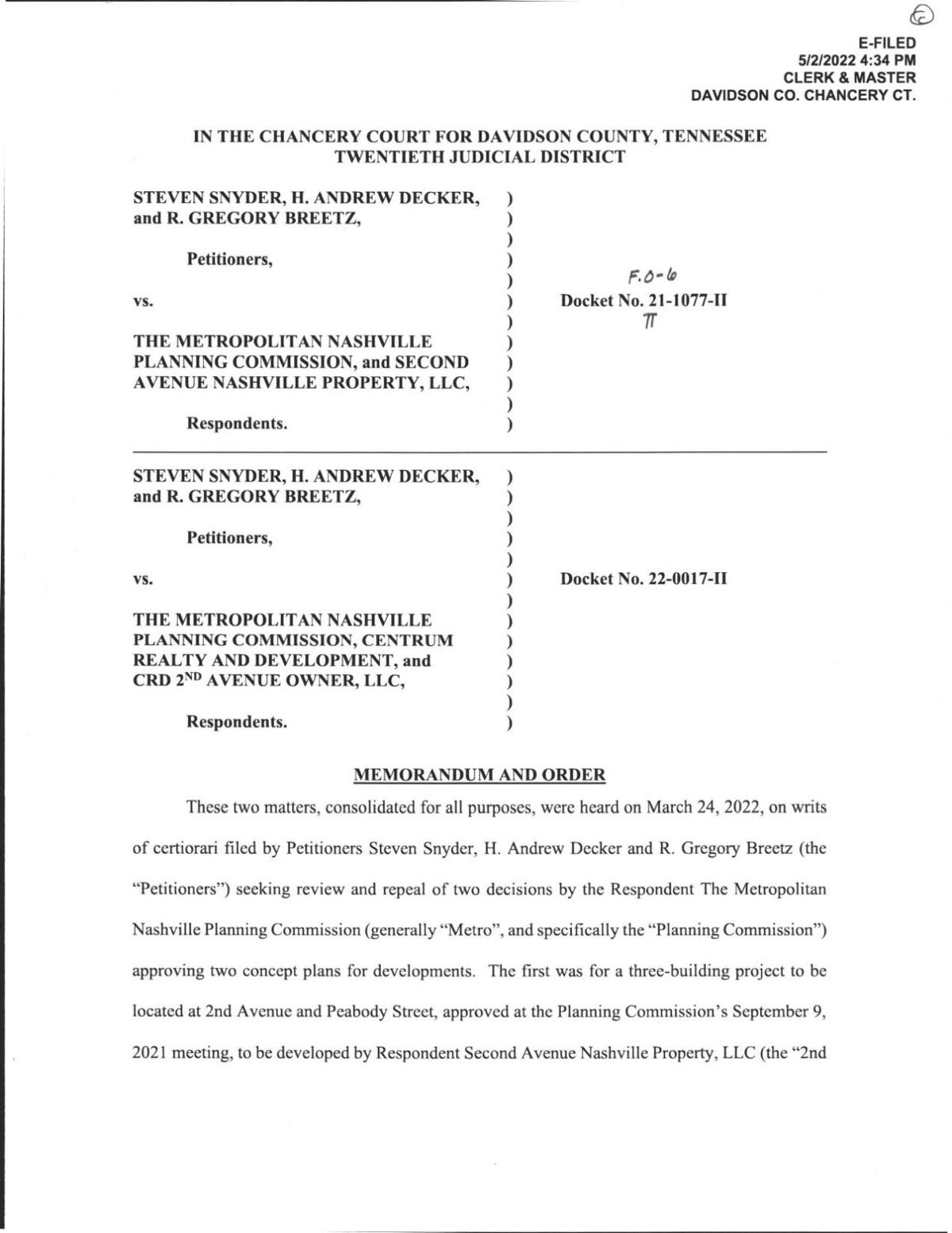